Return to the Glebe

The next newsworthy public appearance for Jim Coffey was in the recently consecrated Parish Church in Loughglynn where on the 19th December 1923 he married Katie Kenny, a young and beautiful school teacher, then teaching in Tibohine National School (Appendix 35 - Marriage Certificate). But soon to be transferred to the larger school in Gortaganny, quite close to the Chapel-Of-Ease serving Tully and neighbouring Townlands.

The exact date when Jim left New York is not known and virtually nothing is known either of where and how he met Katie. In any case, she would have wanted everything to be discreet and private. And Jim organised everything as he was to do for their long and happy marriage.

During those seven years since he bought ‘The Glebe’ Jim had added on a large hay shed, a lean-to turf shed, raised the cow byre about three feet and re-roofed it with slates, erected a boxing ring on the granary floor above the stables and cart sheds, and built a concrete boundary wall with a stile and gate to delineate the limits of the large pasture fields that meandered along the front and side of the imposing dwelling.

At the time he got married he was the proud owner of a motor-car, one of the first in the County, and had all the accoutrements of the prosperous farmer. But special mention should be made that amid the lavish furnishing Jim had treated himself to a console wind-up gramophone containing a large selection of the records of Count John McCormack, the renowned Irish Tenor, who sold millions of records in his heyday. John knew Jim Coffey well in New York, and was an avid follower of the Irish boxing fraternity. He was also a great patron of Gene Tunney, Heavyweight Champion of the World (1926–1928); indeed he introduced Gene Tunney, then World Champion, to several of his audiences in Dublin and also sang at Tunney’s daughter’s wedding in the Vatican in Rome.

Katie’s new school in Gortaganny had three large classrooms separated by full height folding doors, so it was invariably selected for the parochial (almost annual) concerts. Katie, with the school harmonium was a further reason for the selection. She instructed and led the School Choir and solos for at least one half of each concert, commencing perennially with “Bless This House” and finishing off with the Irish National Anthem “The Soldiers Song (in Gaelic)”, together with a great choice of McCormack’s ballads, Percy French’s favourite and dozens of choral and solo pieces. Her class would also perform Padraig Pearse’s “Íosagáin” in Gaelic. She always fell in love with the children in her care and the children and their parents greatly appreciated the hard-working, charitable and conscientious Mrs. Coffey.

The children were Kathleen, the eldest and only daughter born in 1925 who graduated in music when only seventeen years old and went on to be a State Registered Nurse (via Mater Hospital) in 1947. Shortly afterwards she went down with Multiple Sclerosis and following a long spell in hospital died on 23rd September 1980.

Of the three boys Paul became a farmer, eventually to take over The Glebe; Seamus qualified as a Chartered civil engineer working on motorways in England; whilst Pat, the youngest son, had a long, successful career in banking in Ireland.

Many articles have been written about Jim Coffey, the Roscommon Giant, but it is considered that this is the most comprehensive and accurate. He never returned to the U.S.A., never sought any of the honours associated with the game, unlike some of his defeated contemporaries. This may partly be due to the illness of his great manager and mentor, Billy Gibson.

Shortly after the death of Billy’s wife and his falling out with Gene Tunney—Tunney was sorry about it afterwards—I now quote from page 55 to part of page 57 of Lawrence S. Ritter’s book “East Side - West Side” about the Fairmount Athletic Club :

"Although eventually released from the hospital, Billy would not regain full control of his own affairs for many years - not until January 1947 .....

..... Gibson, 71, was found by the maid at mid-day clad in pyjamas, seated in a chair in his hotel room. Death, apparently, was from natural causes. A High Requiem Mass was held for him in the Bronx ....... one can only imagine what happened to the millions he had once been worth, because at the end he left an estate valued at less than $1,000."

Retirement from the Glebe

Katie retired from Gortaganny School in the Spring of 1956 with a great send-off from the devoted children and parents of those days. Jim himself at the same time handed over The Glebe and Glebelands to his farmer son, Paul, and the retired couple went to live in a bungalow in Redesdale Road, a short distance from Saint Teresa’s Parish Church (also called ‘Our Lady of Mount Merrion’). Whilst his Mother went back a few times to see Paul settled in, Jim himself however, on leaving on 31st March 1956 was never again to see his beloved Glebe. In early December 1959 he was taken seriously ill and on transferring to Baggot Street Hospital he was diagnosed as having a massive cancer of the stomach and pancreas. After a mercifully short few weeks and visited by all his family, he passed away in the early hours of 20th December 1959, aged sixty-nine years (almost seventy). Appendix 36 - Obituary is a copy of the notice covering the details of the funeral on 22nd December 1959.

The evening before (i.e. on 21st December) he was formally brought in to St Teresa’s. By an odd coincidence, there also, since his death on 16th September 1945, was the Altar from the Private Chapel from Glena, John McCormack’s last home in Booterstown. Katie was bound to recall Jim’s best loved song, John McCormack singing ‘I Hear You Calling Me’—“a sort of hymn in a way!” she thought, as they came away.

But the funeral was delayed because Pat Crawley’s hearse broke down in Ballymahon—a faulty tyre. And the vintage hearse didn’t carry a spare. The puncture had to be repaired in the local garage.

Ned said “This could be a long job” and then went on “I’ll go and get the Irish Press. It’ll help to pass the time and let’s see if they’ve got the Obituary right.”

He was back in a few minutes holding the paper open at the back page. “They’ve got it all alright—well except for Crawley’s flat tyre—and we can hardly blame them for that.”

He then flicked the paper over to the front page. “Oh my God”, he exclaimed, “Jim has made it on to the front page—with a photo too—in a boxing pose ‘Jim Coffey in his prime.’ ” We were all surprised.

Katie intervened, “A fair bit about him as well” she said “Let’s get back in the car out of this drizzle and see what they have to say.”

As she read out the nine or ten paragraphs Ned kept interrupting; “The fight with Al Reich was in 1915, not 1913. Jim then was only twenty-five or so; and he did not retire after the defeat by Moran; in fact he had more fights after Moran than before; he only retired in 1922, May to be exact, then aged thirty-two. A good seven years after Moran.”

“You’re just quibbling” complained Katie. “They’re only minor mistakes. If he were here himself, God Rest him, he’d be proud to have hit the front page, proud to be remembered.”

“Front page and photo and all! They could have got it right”, grumbled Ned.

And so ’twas late afternoon when the cortège reached Loughglynn. A soft gentle rain was falling on the crowded road and footpath; bikes were stacked in depth against the walls and windows. By now the lines of cars would have stretched away beyond Roscommon. But the real sense of grief could be felt by the cap-in-hand mourners who lined the street. Word had earlier come through the Post Office and the Parish Priest had been told there could be at least a two hour delay. Nobody seemed to care. Along the avenue to the Parish Church there was a murmur of Prayer as the Rosary was started. Then when the hearse appeared a few minutes silence was observed and the Priests and altar boys joined in the procession. Not far now to the cemetery; a few hundred yards on this main Castlerea to Ballaghadereen Road to the junction later with the Ballyhaunis Road and the New Cemetery in the Townland of Cuiltyboe. For some time now the rain had eased and visibility had improved so that on looking west from the graveside across the Cloonbunny Townland, The Glebe was clearly visible. Jim Coffey, the Roscommon Giant, had come home.

His wife Katie lived on in Dublin and Chapelizod for a few more years, then retired to a nursing home in Drumcondra, and eventually fulfilled her heart’s desire by spending her final days with the nuns in their nursing home in Tullamore until her death on 2nd February 1975. Kathleen, their daughter, died on 23rd September 1980 in a nursing hospice.

The headstone shows that the three share the family grave in the New Cemetery in the Townland of Cuiltyboe. Their favourite prayers were, inter alia, The Angelus and The Rosary.

May the good Lord keep them in the palm of his hand. 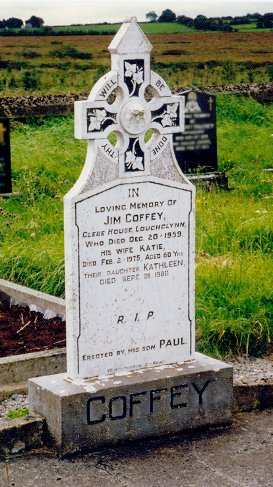