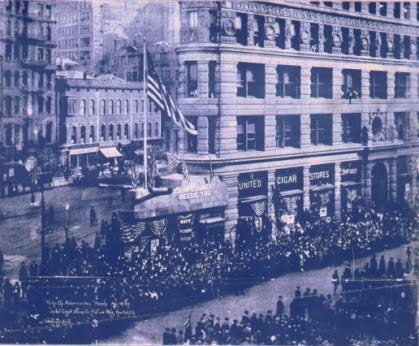 By Spring of 1917 World War One had been raging in Europe for about three years. After much provocation, on 6th April 1917 President Woodrow Wilson announced that the USA had declared war on Germany. On 18th May conscription was approved by Congress and applied to all men aged twenty-one to thirty, both ages inclusive. The age criteria cut right through the vast majority of the boxing fraternity but (in my opinion) there was no great rush to join the Expeditionary Force heading for Europe, but there was a real rush to avoid it; Either on health grounds or reserved-occupation grounds.

Take for example Jack Dempsey. About two years after the end of the war Jack was prosecuted for falsely claiming that he was the sole supporter of Maxine his wife, and family through part of the war, whereas Maxine, through the Press, claimed that she had supported Dempsey and his family through her immoral earnings. The charges were dismissed but the Press resurrected them again when Dempsey came to defend his title against Georges Carpentier (2nd July 1921) when they billed Carpentier as a war hero (which he was back in his native France) and Dempsey as a Draft Dodger; Factors which may have contributed to the first Million Dollar Gate (Appendix 32 - First Million Dollar Gate). Incidentally, Carpentier caught Dempsey with the Frenchman's massive right to the jaw in the second round - however Dempsey recovered and knocked out Georges in the fourth. Dempsey avoided the Draft but of course he contributed greatly to many exhibition bouts, the Red Cross and War Bonds.

Again, the war suited Jess Willard as it allowed him to pursue his favourite pastime - exhibition bouts without his precious title being at stake. 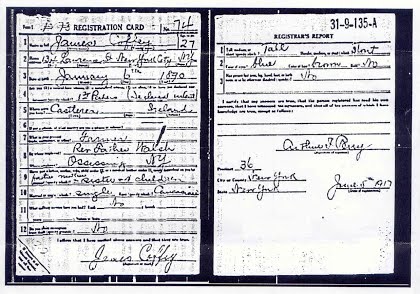 Jim Coffey's Registration for the Draft

On the other hand Gene Tunney who was anxious to join the Marines, was held back for a short while because of an injured arm but he joined as soon as he passed the medical. He was then twenty-one and had been boxing professionally for a few years, even with the damaged arm. From an early age he was keen on keeping fit and boxing - very suitable attributes for the Marines. Boxing was a great favourite with the Allied Forces in Europe and Tunney quickly moved up the ranks, ultimately being crowned as the Light Heavyweight Champion of the American Expeditionary Force (AEF) (Appendix 31 about Gene Tunney by John Jarret.) But his aim, indeed it became an obsession, was to defeat Jack Dempsey who had just about this time (4th July 1919) given a severe beating to Jess Willard for the Title. But Gene Tunney was in no way dismayed.

For Jim Coffey conscription presented a delicate problem. As an Irishman, and because the British then occupied Ireland, he automatically became a British subject and there were conflicting rumours as to whether they would impose conscription on their Irish subjects or not. As far back as 1914, at the start of World War One, Jim had been advised to take out American citizenship and he had done so, to avoid any complication with the British - this is mentioned in a brief note in Appendix 24 - Moran 1916. Jim was not a rabid Irish patriot - he felt he had enough to contend with in Madison Square Garden, but he did sympathise with the Irish struggle for independence. It is known that he looked after his younger brother Tom (aged two in the 1901 census) and his brother's friend, Tom Crawley, who were both allegedly involved in the burning down of the British Barracks at Ballinlough (a few miles from Tully village) and sought refuge in New York. Later on in the days of the Black-and-Tans the Glebe became a "safe" house for volunteers "on-the-run". Therefore 'twould be against Jim's natural instincts if he were to be drafted in to the British Army. At the same time he had no intention of dodging the Draft in the USA. He was advised therefore and decided to queue up and try to enlist as a guard on anti-spy work at Brooklyn Navy Yard. While queueing there on or about 10th March 1918, a fracas broke out amongst the applicants and Coffey played a big hand in quelling it. Appendix 29 - Navy Guard refers. And that solved his enlisting problem. However, one wonders why the Press report gives his height and weight as 6 feet 2.5 inches, and 205 respectively. Old habits die hard! 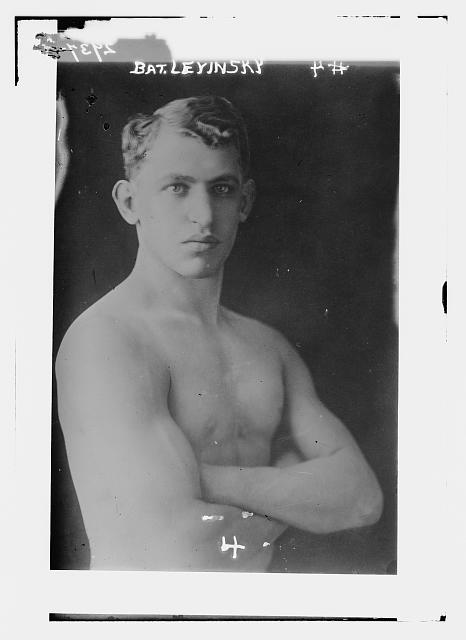 Boxing bouts were a big help to recruitment. Jim was of course also available for exhibition bouts. The records show that during 1918 he had six No-Decision bouts with his regular adversary "Battling" Levinsky, three exhibition bouts with Harry Greb (famous for his defeat of Gene Tunney, a defeat avenged four times afterwards by Tunney) and another with Joe Bonds (See Appendix 30 - Recruiting.)

However, Coffey had lost none of his ambition in pursuit of the heavyweight title, and to this end early in 1919 (12th Feb.) he went twelve rounds with (guess who?) "Battling" Levinsky. Coffey, who only months before had fought two No-Decision bouts with the Battler and again about a year before that (11th Sept. 1917) had fought a twelve round draw with the same Levinsky (as well as several other bouts previously) this time lost the decision, to Coffey’s great annoyance. But, as surmised before, let’s call the Coffey/Levinsky battles as level pegging and look at two of the other serious bouts in 1919 in the U.S.A.

On 3rd March 1919 he won on points over eight rounds a decision against Larry Williams. Oddly enough they had met seven years before at the very outset of both careers when Coffey KO’d Williams in April 1912 in round two. In more up-to-date times (1921) after the Dempsey-Carpentier fight, Tunney engaged Larry Williams to work out with him because for the Carpentier fight Williams had been Dempsey’s chief sparring partner. Tunney as well as studying films of Dempsey’s recent fights used to also hire any boxer who had boxed with Dempsey. Larry was invaluable to Tunney who considered Larry to be a smart, fast, heavy-hitting heavyweight. To survive as Dempsey’s chief sparring partner was no mean feat. For Coffey to beat Williams in eight rounds showed he was still picking top opposition. 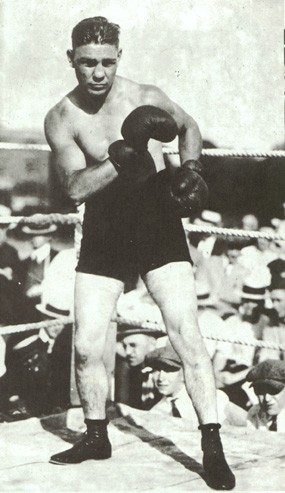 This also applies to Jack Clifford who went six rounds with Gene Tunney a few weeks after Tunney’s winning the title of Light-Heavyweight Champion of America from (guess who?) "Battling" Levinsky. Another example of a victory for youth and strength (Tunney) over age and experience (Levinsky).

Coffey’s third fight in 1919 was a bit of a fiasco. Some business shop-keepers in Castlerea, County Roscommon, arranged that Billy Warren, a supposed professional boxer, would oppose Coffey in a boxing match in the town. They told Coffey that it was only an exhibition bout and he was to take it easy with Warren. However, it seems they forgot to tell Warren, so he seriously assaulted Coffey, who defended himself by knocking Warren out.

Warren had claimed he’d fought with Jack Johnson, but even in the longest record of Johnson’s career there is no mention of Billy Warren. Rumour had it that he hadn’t boxed for six years. It isn’t known what became of the prize money, or Billy Warren for that matter. It’s a surprise that the “fight” is listed in most records. The actual date of the incident in Castlerea is not known.