Frank Moran KO's Coffey in Round 3

Madison Square Garden was packed to the rafters, and by the sounds of the fans, the majority of them must have been of Irish descent. Coffey was cool and confident, Moran his usual dour self.

Those who fancied Jim to win were early encouraged as he moved round his slower opponent, jabbing him almost at will. Frank had only one punch, a roundhouse right swing which he had christened Mary Ann, boasting that if she kissed a man's chin it was all over. Jim kept her at arm's length, then slipped over a smart right.

What he did to Moran in the early rounds was a shame, while Frank could do nothing but swing, either to head or body and miss badly. It was like a carthorse versus a thoroughbred. The Irishman hit his opponent at will, but it was like bouncing a rubber ball against a brick wall.

When the fans saw that Frank was bleeding from the nose and mouth they raised the roof. Moran smiled through his cut lips, but he looked grim. He kept tossing his 'sweetheart' in the hopes of connecting with his rival's chin.

In the second round Coffey bombarded his opponent with lefts and rights to the head. Frank appeared groggy and Jim went to finish him. He was so keen to stop his man that he walked right in to a tremendous life-saving punch from Mary Ann that sent him wobbling all over the ring.

Out on his feet, he managed to stagger into the ropes and put up a sound defence for the remainder of the round.

Moran was full of confidence now and waded into the Irishman as soon as they came from their corners for round three. Frank swung a left to the body and put over a might right that landed plumb on the target.

Coffey crumpled and staggered forward as if to clinch. He was an open target and just what Moran wanted. He measured Jim with a left and then let the right go with all his arm power behind it. It landed flush and the Irishman dived forward and fell flat on his face.

Somehow he managed to pull himself off the canvas and sagged into the ropes, holding grimly on to the top strand to steady himself and gaze out with lustreless eyes at the sea of faces. Moran looked at referee Bill Brown who seemed undetermined as to the best thing to do.

Then Frank took the law into his own hands and started towards the stunned Irishman, but the referee got there first and stepped between them, then escorted Coffey back to his corner, while Frank and his friends did a war dance in the ring, for an idol had been shattered. 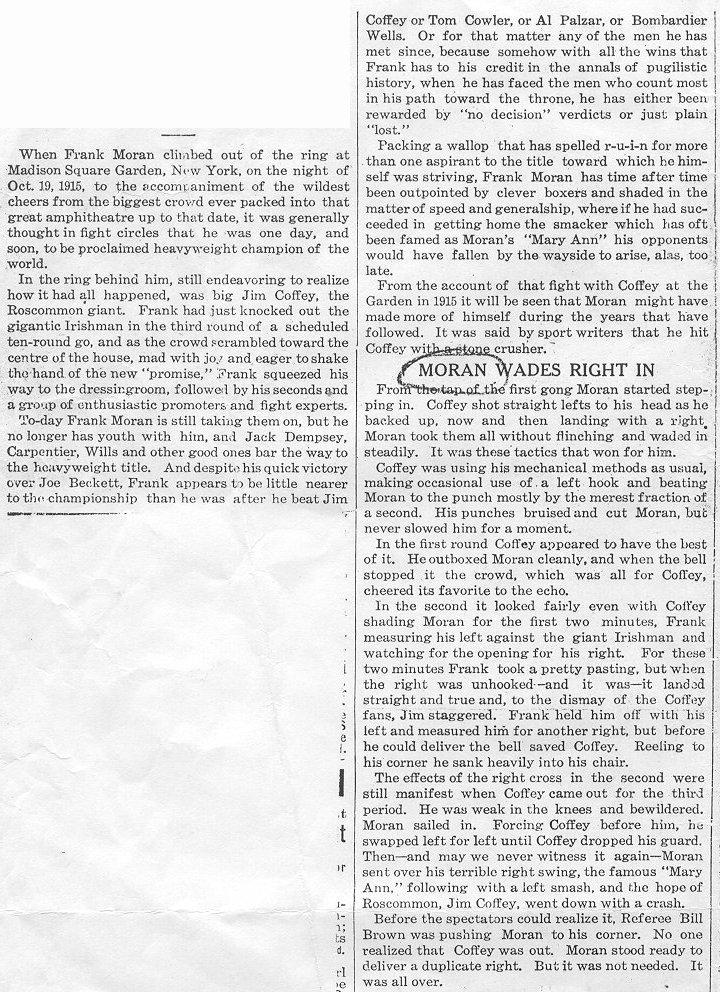